Strauss's music amounts to a huge body of symphonic and operatic work written over 60 years. Full of vitality, endlessly melodic, brilliantly orchestrated, it begins and ends in the romantic tradition, but for the most part expresses something more modern and individualistic, not without controversy in its time. Variation of style and structure is drawn from the descriptive (literary) nature of compositions, and an extraordinary inventiveness enlivens the scenes, moods and situations. Strauss said once that he produced music the way cows give milk, and indeed his music rarely seems contrived.

Strauss wrote 15 operas on a variety of subjects and across the whole spectrum of drama. He acknowledged being enchanted by the soprano voice, and his writing for it highlights many of the works, including Adriane auf Naxos (composed in 1912). The opera has been described as 'sparkling', which sums it up well, and passages influenced by Bach, Mozart, Puccini, and Wagner add to the interest. The storyline is a play within a play, the second part being the mythological 'Opera' staged in the story. The three pieces transcribed* are from this Opera.

All classical guitar pieces are compromises. The instrument has only six strings, the left hand four fingers able to be used, and with the right hand it's rare to use more than three fingers and the thumb. So, despite the amount of noise possible, it's inevitable that passages occur where either harmony, bass or fragments of counterpoint that would be beneficial are left out. In particular, the higher up the neck music is played the simpler it tends to be, if harder to play, and unless the low bass is an open string there wont be any.

So I think the main part of attaining a fair transcription (better to be called an arrangement if the original musical structure is not strictly followed, as in this case) is determining how a good compromise can be reached. Melody, counterpoint, bass and main harmonies demand inclusion, and register is important. One may generally assume the original score can't be improved on. However, if the music may sound well on guitar, and the above elements can be incorporated without the playing becoming very difficult, something enjoyable to play and worthwhile listening to should be able to be achieved.

Here the Mozart influence, better, inspiration, is wonderfully evident. A gentle waltz time (only the first section of the overture is transcribed) carries the colourful harmonies, strong melodic threads and connecting flourishes that stamp both pieces. The aria is alluded to in the Overture several times, which as you would expect, is intricately woven with the hints themes later to be established in the Opera. It has a kind of 'jazzy' freedom, and it's always miraculous to me that composition so involved can retain its musical line, here done in Strauss's inimitable way. The aria, sung not far into the Opera, has the perfect inevitability of Mozart, but again it is Strauss. As explained, keys have been changed to suit the guitar.

This selection from the finale has features well worth trying to translate. The device of having a strong chorus, in the style of a Bach chorale, stated and then counterpointed by a solo voice in a restatement, is potent, and that in the opera the chorus (of the three nymphs) isn't immediately followed by the accompanying aria (of Ariadne) means the latter comes as a moment of surprising beauty. Neither parts are complicated, and lovely arpeggios, a feature Strauss's music, often impart the assured progressions.

A problem was to capture the distinct register of the soprano voices, some statements of which would seem non-negotiable even without knowing the soprano voice was a passion of Strauss's. This could only be done, as intimated above, with some simplification. However the sound was worth working for, and fortunately the repetitive nature of the piece allowed for sections to be played at various registers to good effect, the higher producing the excruciating soprano harmonies.

Also, the original is in Db, so by raising the key a semitone I was able to utilise the guitar's D tuning as a full sounding configuration on which to arrange the piece. I'm fond of harmonics and open strings (in fact, arresting sounds in general) and used them where appropriate (or as sometimes, necessary). 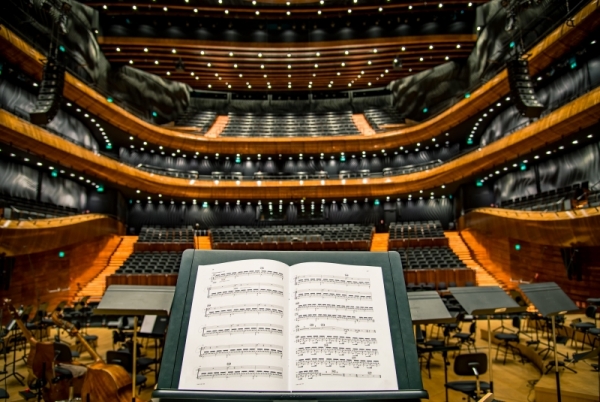 Also from the 20th Century period: